Wurru‑Ki is a program that provides all Barwon Health employees, volunteers, contractors, consultants, etc (‘workers’) with a confidential and non-confrontational alternative for seeking to resolve any workplace behavioural concerns they might have in relation to any other worker by engaging with peers who have been appointed as Peer Contact Officers and Peer Resolution Officers.

Literature tells us that many individuals choose not to lodge complaints as they do not necessarily want to participate in a formal process. Rather, they just want the behaviour to stop. The introduction of Wurru‑Ki empowers individuals to achieve such an outcome without the fear and potential consequences of a formal investigation and without the daunting prospect that comes with attempting self-resolution.

The focus of Wurru‑Ki is on agreement being reached on a way forward between individuals. It does not require a decision or judgement as to who was right or wrong, or who is to blame. Resolution of issues can be achieved as early as possible, with the least disruption to working relationships.

Wurru‑Ki adds to, but operates independently of, Barwon Health’s Managing Complaints of Unsatisfactory Performance and Misconduct Guidelines, and accords with a ‘Hierarchy of Control’ conflict resolution model developed by Vanderbilt University. It also fits within the framework of Barwon Health’s Code of Conduct, policies, procedures and enterprise agreements.

The ‘Hierarchy of Control’ model is an effective strategy for the management of inappropriate workplace conduct. It is premised on an escalating response, from informal conversations to raising awareness and reinforcing organisational values and expectations to ultimately bringing an individual’s employment to a conclusion if their behaviour remains unchanged or worsens. It sets out a clear direction for how Barwon Health responds to instances of inappropriate workplace conduct. The intent is always to bring about a cessation of the inappropriate conduct and prevent any re-occurrence.

Wurru‑Ki is designed to operate across Levels 1 & 2 of the Hierarchy of Control. 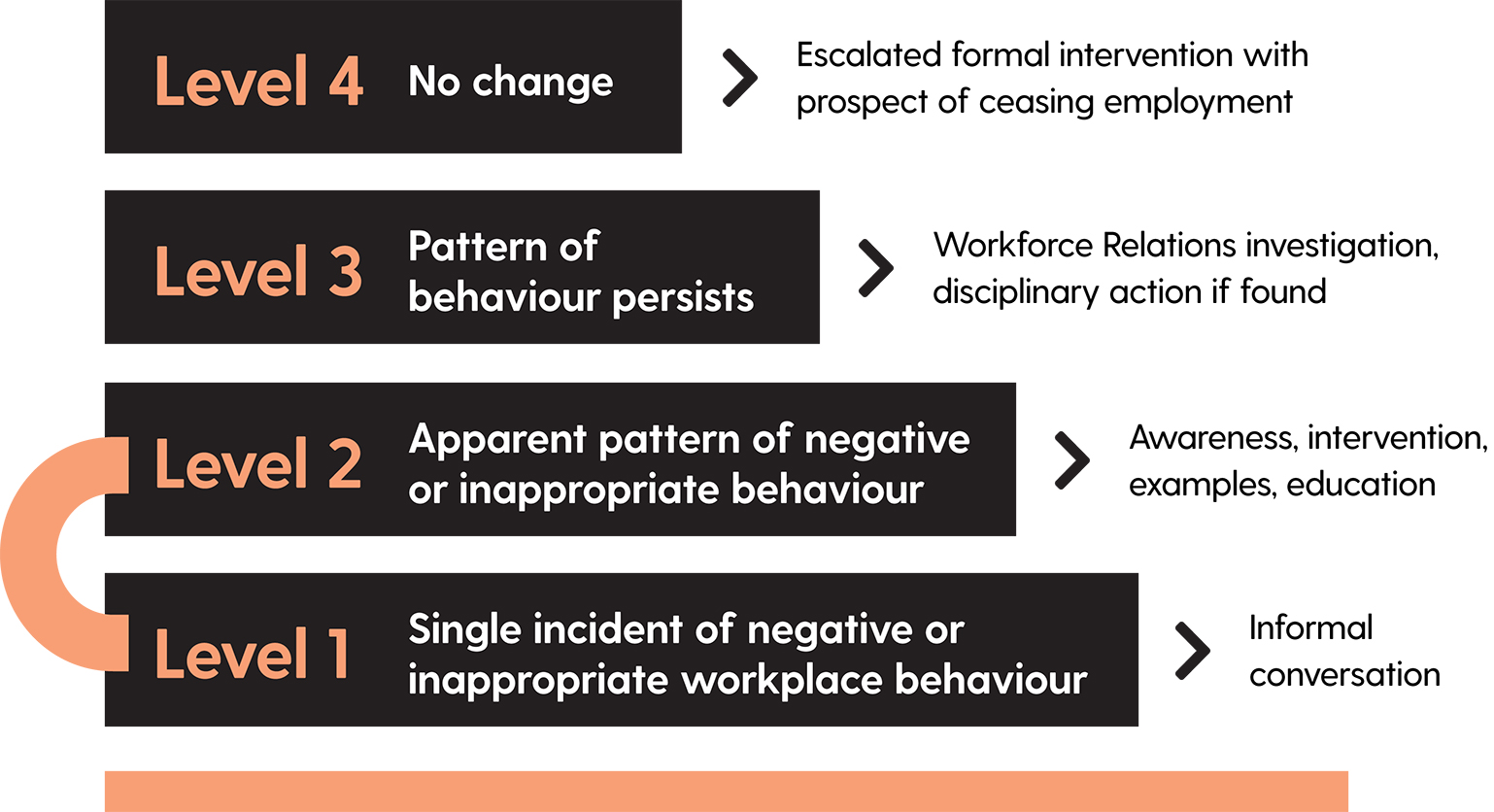 Peer Contact Officers are the first point of contact for any worker who wishes utilise Wurru‑Ki to address any workplace behaviour matter that is of concern to them, and by doing so they become known as an Initiator. Peer Contact Officers will listen to and discuss the issue with the Initiator and advise of three choices that are available to the Initiator under Wurru-Ki. One of the three choices available is referral to a Peer Resolution Officer.

Peer Contact Officers are specifically trained in their role. They operate objectively and impartially, and will not investigate matters nor advocate for any person. Similarly, they will not make determinations as to who is right or wrong, nor apportion blame upon any person.

If the Initiator then chooses to proceed further, the Peer Resolution Officer will speak with the person who is the cause of the concern (the Respondent) to let them know of the concerns raised, and by whom, and then attempt to facilitate an agreed resolution between the Initiator and Respondent. This could involve bringing the parties together if they are both happy to do so, or otherwise try to bring about a resolution by working with each of them separately. The decision as to whether an agreed resolution is reached rests jointly with the Initiator and Respondent.

Peer Resolution Officers operate objectively and impartially, and will not investigate matters nor advocate for any person. Similarly, they will not make determinations as to who is right or wrong, nor apportion blame upon any person.

The Wurru-‑Ki Director has overall responsibility for, and immediate oversight of, Wurru‑Ki. As such, Peer Contact Officers and Peer Resolution Officers are required to liaise with and notify directly to the Wurru‑Ki Director any matters they are involved with under Wurru‑Ki.

The amount of information that is provided to the Wurru‑Ki Director depends on which confidentiality option an Initiator has chosen. If however a Peer Contact Officer or Peer Resolution Officer forms a view that the matter that has been discussed with them, if it were to be proven, may be criminal in nature, may warrant termination of employment or may require mandatory reporting, then there is a requirement to provide the Wurru‑Ki Director with all relevant details.

The Wurru‑Ki Director will not take any action in response to notifications made to him / her, unless the seriousness of the matter and/or any legislative reporting responsibilities necessitates him / her doing so. If the Wurru‑Ki Director is compelled to take any action in this regard all reasonable steps will be taken to maintain the confidentiality of the Initiator.

The Wurru‑Ki Director also maintains an ‘Issues Safe’, where any notifications made are held confidentially (unless the Wurru‑Ki Director is compelled to take action). The information held in the Issues Safe is otherwise only used for monitoring trends across the organisation and for the identification of any areas where a particular preventative and/or remedial focus may be required (but without identifying individuals who have accessed Wurru‑Ki).

An Initiator is any worker who accesses Wurru‑Ki because of a concern they have in regards to the workplace behaviour of another worker.

A Respondent is any worker identified by an Initiator as the person responsible for the workplace behaviour which has caused the concern for the Initiator.

Further information can be obtained by: